There are many adjectives to describe Kangchenjunga (8,586 m), the third highest peak on Earth. The first and easiest is “huge”. But for the Italian 14 × 8000m peaks Nives Meroi and Romano Benet, that’s more than just size. It is the staging of a drama of near death, love and a lifelong challenge ended together.

Meroi and Benet needed three tries to reach the top. All of their attempts were without supplemental oxygen. During their first, in 2008, Romano suddenly felt ill while at Camp 4. Nives helped (sometimes dragged) him to base camp. Here he was urgently evacuated and repatriated.

At the time, Nives was in the race to become the first woman to climb the 14 × 8,000’ers. But as rivals Edurne Pasaban, Gerlinde Kaltenbrunner and Mi-sun Go rushed to their next expedition, her husband’s illness took Nives down another path.

The next two years consisted of long hospital stays, confused doctors, two bone marrow transplants, and a hard, slow recovery. The couple stayed at home in the mountain town of Tarvisio, in the northeastern corner of Italy between Austria and Slovenia.

From the early stages of Benet’s disease, Meroi declared herself “happily” out of the race. “Romano comes first,” she told ExplorersWeb at the time. Additionally, she was uncomfortable with the increasing use of Sherpa media and O2 involved in this record pursuit.

Instead, she stayed with her husband throughout her recovery. Finally, she returned with him to Kangchenjunga in 2012, along with Peter Hamor and Horia Colibasanu. On this occasion, they learned the importance of careful navigation on this massive peak. On the day of the summit, the two Italians and Colibasanu took the wrong lane. Peter Hamor made it to the main peak, while the other three ended up on the lower midpoint.

When they returned to Kangchenjunga in 2014, things started to change: Commercial expeditions took over and changed the experience forever. However, the Italian couple managed to launch their last summit a day before the others. They appreciated and suffered the mountain as it had always been, without ropes, alone.

This is important because the higher you climb the Kangchenjunga, the more difficult it becomes. Below they outline the full itinerary for ExplorersWeb.

The trek to Kangchenjunga is one of the most beautiful in Nepal. “But it’s also the most tiring,” Romano explained, “because instead of going up just one valley, it goes through one valley after another. A new road cut the journey down by two days, but it still takes five. six days to reach base camp The last two days in glacial terrain are particularly difficult for porters. 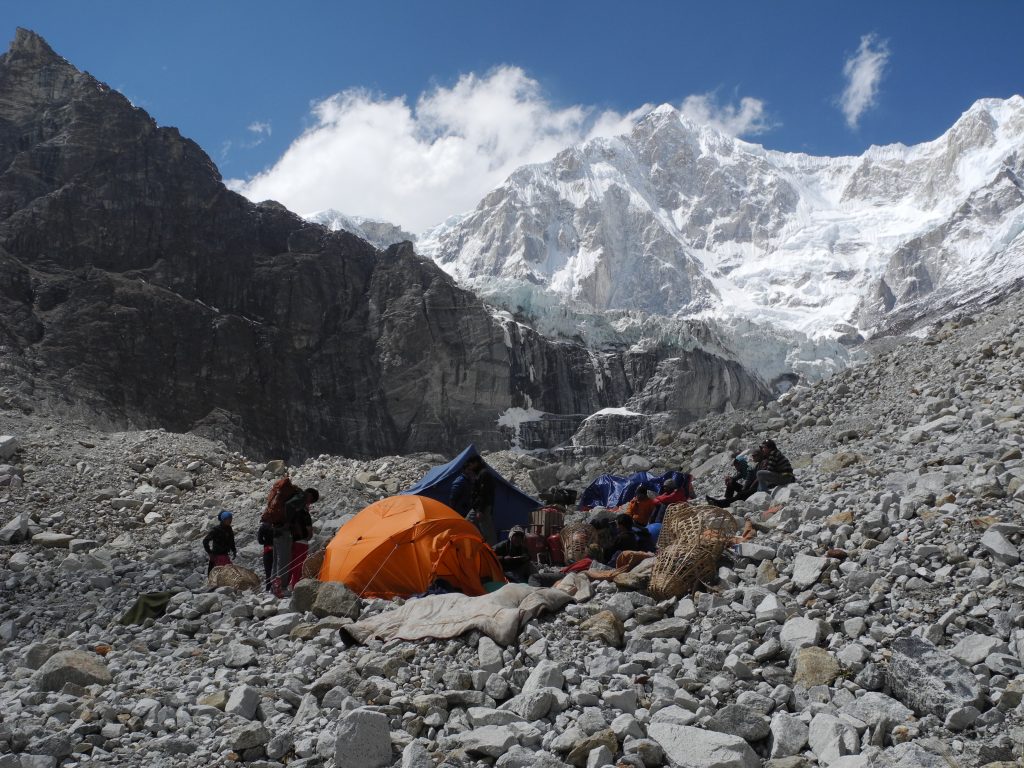 Lodges are scarce and less well supplied than in other regions. “The groups are now skipping the march and taking a helicopter to base camp instead,” Benet said. “They save time but miss a very good part of the expedition.

Climbers catch this airlift to base camp from a helipad in Seram. “Nepal’s skies are more and more like highways,” Nives said.

The base camp is comfortable, generally very sunny, and is on dry, grassy ground. His only problem is the water – there isn’t any nearby – so all the water is coming from a place within a 30 minute walk of British Columbia.

The snowy surface begins shortly after leaving base camp. 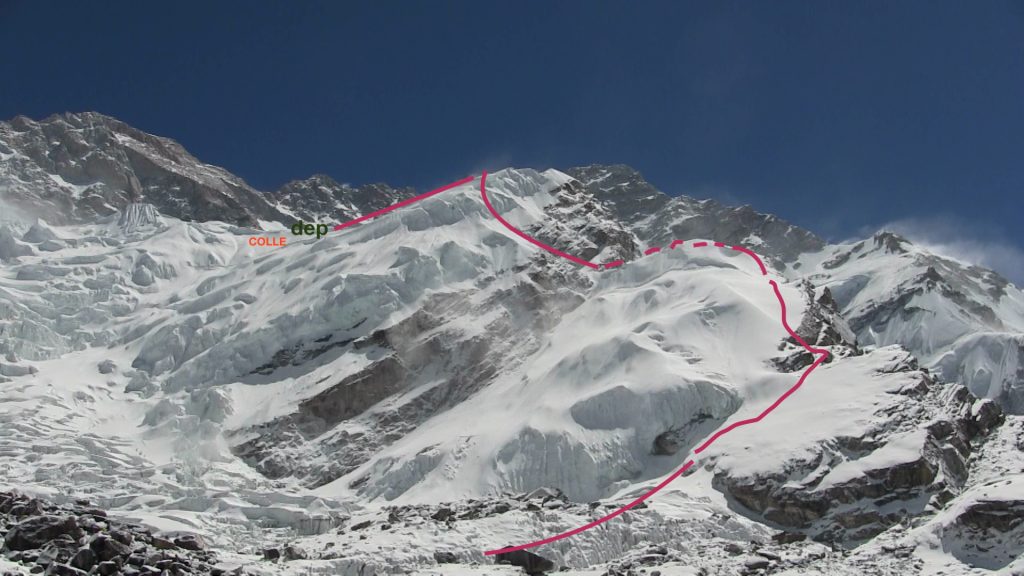 The route climbs up the slopes to the west in order to avoid the icefall of the Kangchenjunga glacier. “There are 700 vertical meters of moderately difficult terrain, mostly steep snow slopes (up to 50º),” said Romano. “Sherpas with bigger teams are always fixing this section.” 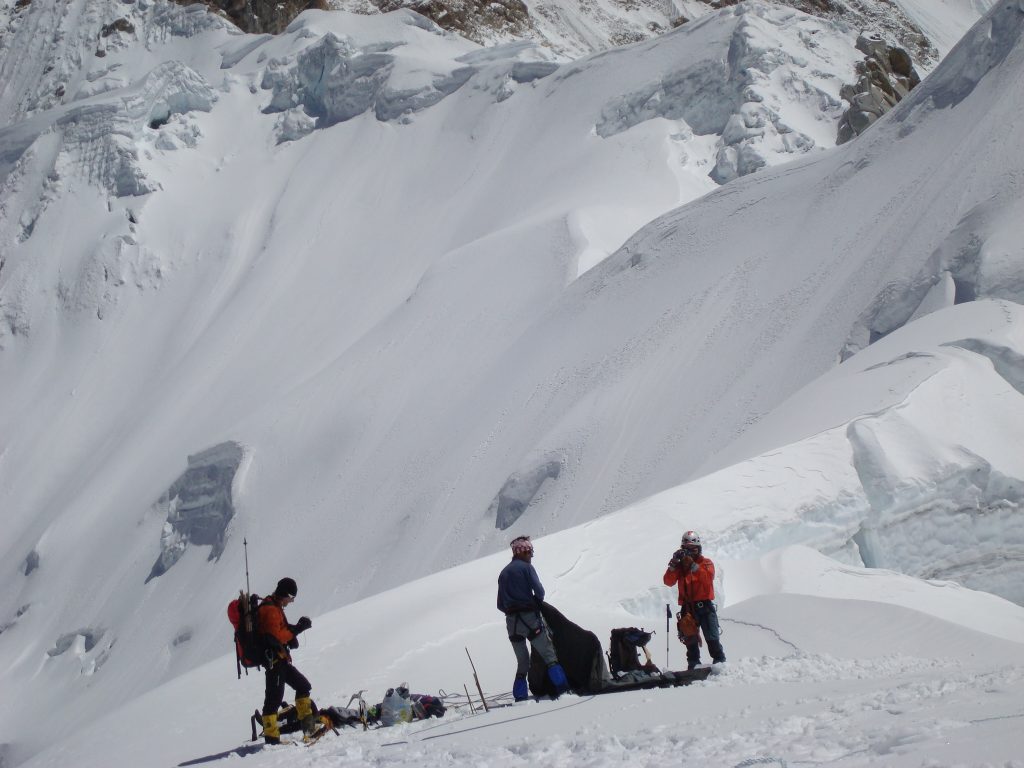 Climbers in the saddle, before descending on the glacial plateau. Photo: N. Meroi / R. Benet

After climbing the side slopes, climbers reach a distinctive saddle. From there, there is some 200 meters of vertical drop to be covered to descend to the Kangchenjunga glacier.

Most of the teams build their Camp 1 directly on the saddle, while others push further and descend towards the glacier. That’s what Meroi and Benet did in 2014 on a long first day over British Columbia. 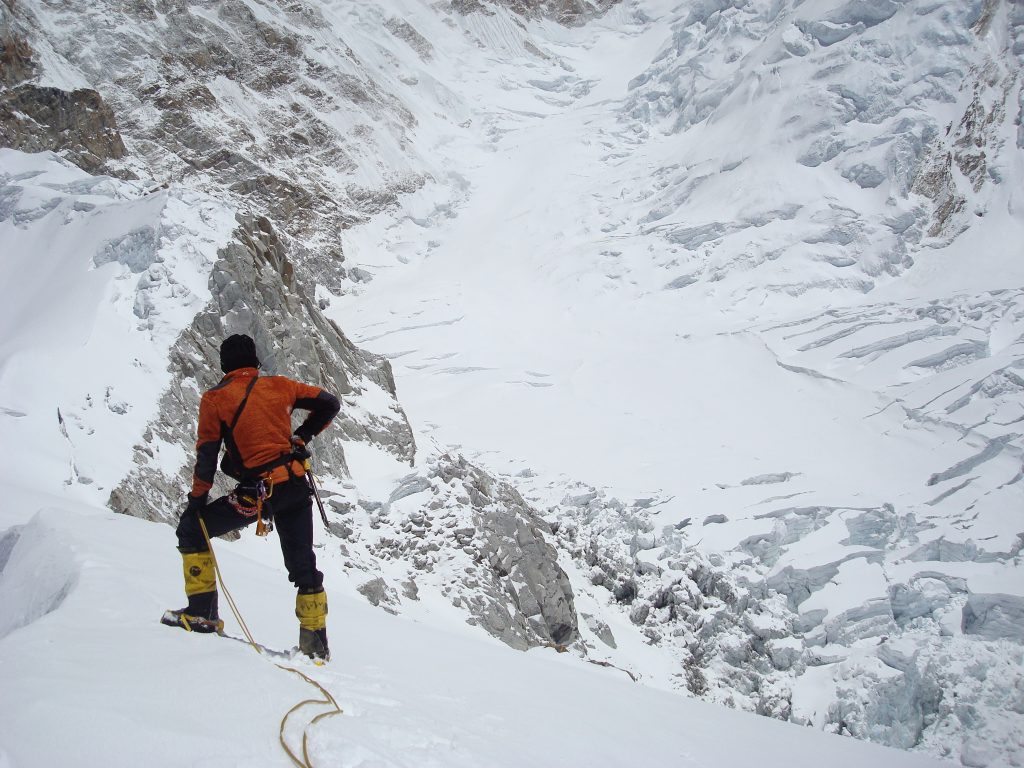 View from the pass down onto the glacial plateau. Photo: N. Meroi / R.Benet

The next section crosses a huge plateau, on flatter but crevassed terrain. On this 1.5 km long platform, there is not a single place for Camp 2. On the contrary, each expedition estimates distances and strength, and sets up its tents somewhere on the plateau, enough. near the face that rises at the end of it. 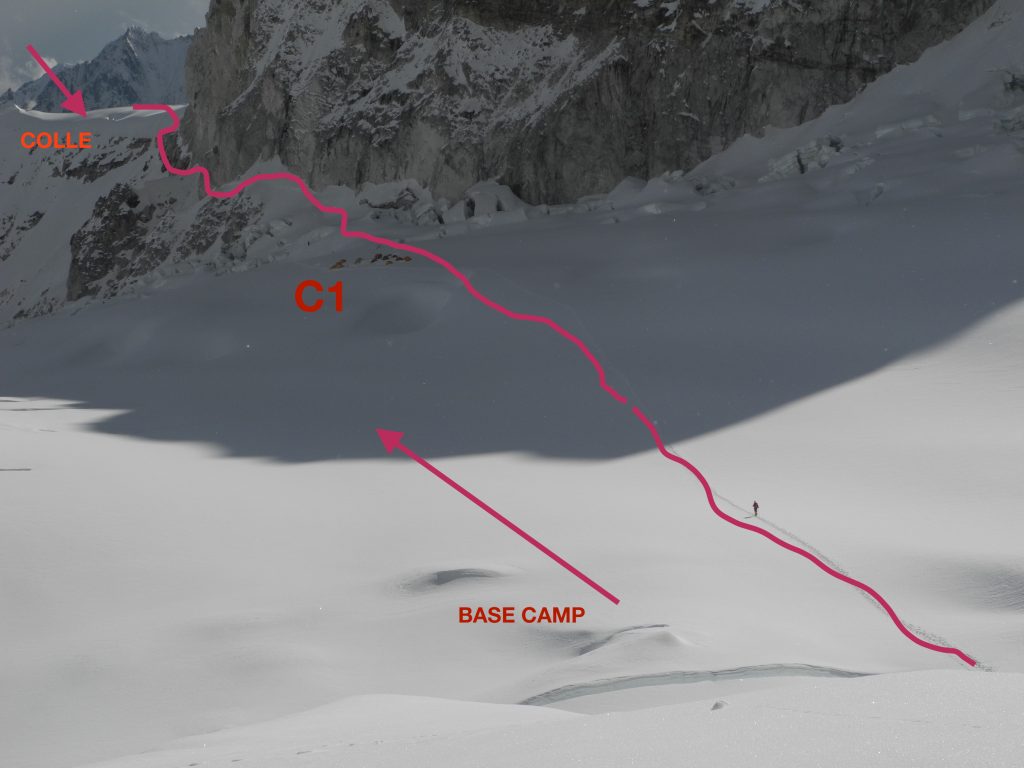 Retrospective of the Italians’ tent at 6200m on the plateau. Photo: N. Meroi / R.Benet

The same goes for Camp 3: It can be located at the end of the plateau or on the first slopes of the front. The lower part of the face is steep but not too technical. The most difficult parts are where the seracs cannot be avoided and must be climbed.

“These seracs are all along the road,” Benet said. “Some are easy to climb, others are more difficult.”

Sales teams repair the steepest sections. “[How difficult they are] depends on snow and ice conditions, which vary from fresh, deep snow to very hard ice, ”said Meroi. 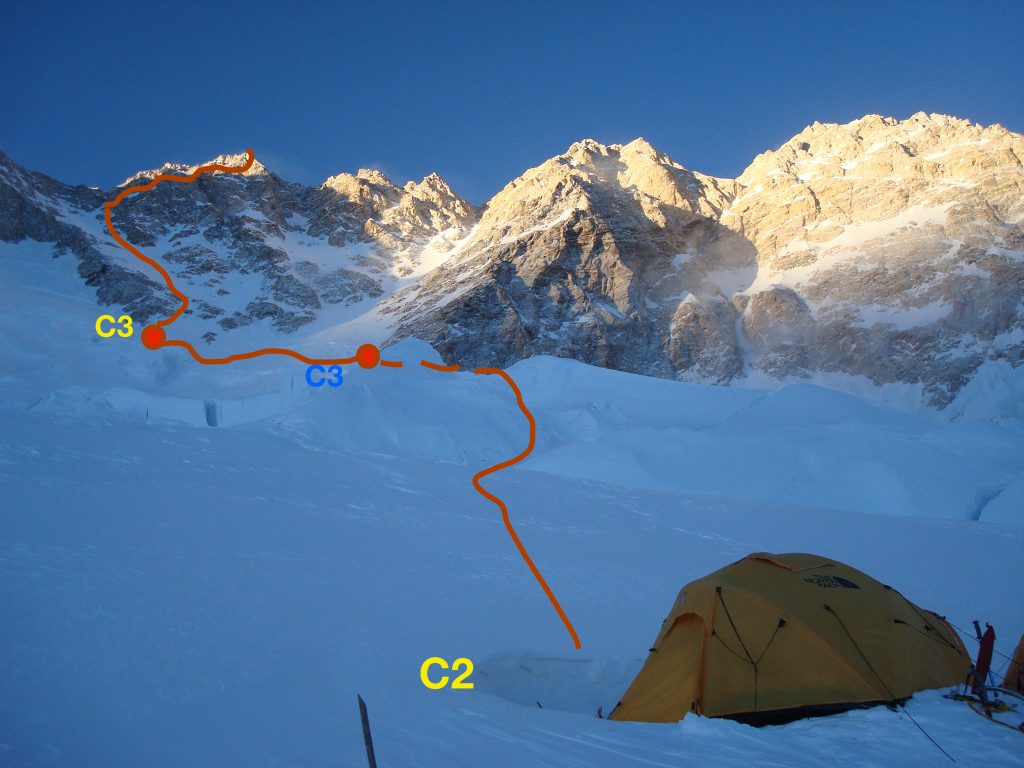 You can set up Camp 3 at the top of the serac barrier or higher. Above the seracs, the climbers reach another plateau. The first expeditions called it the “Grand Plateau”.

“We set up our camp 3 well up the Grand Plateau, but other expeditions had set up theirs lower down, around 6800m,” Meroi recalls. “The Kangchenjunga is so long that the strategy of the camps varies from team to team. The possibilities are limitless. “

At the Grand Plateau, be sure to follow the most logical path to the top. This is not a problem in good weather, but difficult in the event of a whiteout, both uphill and downhill. 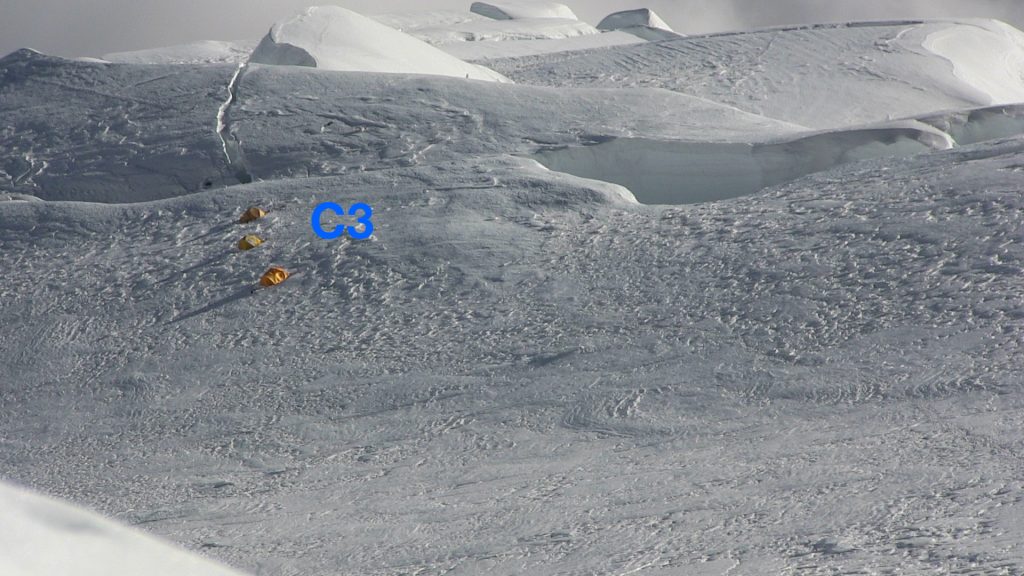 The route from Camp 3 to Camp 4 is the easiest of the entire climb, according to Romano Benet. As long as you don’t get lost on the plateau in bad weather, just walk to Camp 4, which is usually around 7,400m. Although Meroi and Benet pitched their highest camp some 200m higher, “it was inside a crevasse,” Meroi said.

From camp 4, the situation changes radically until the summit. 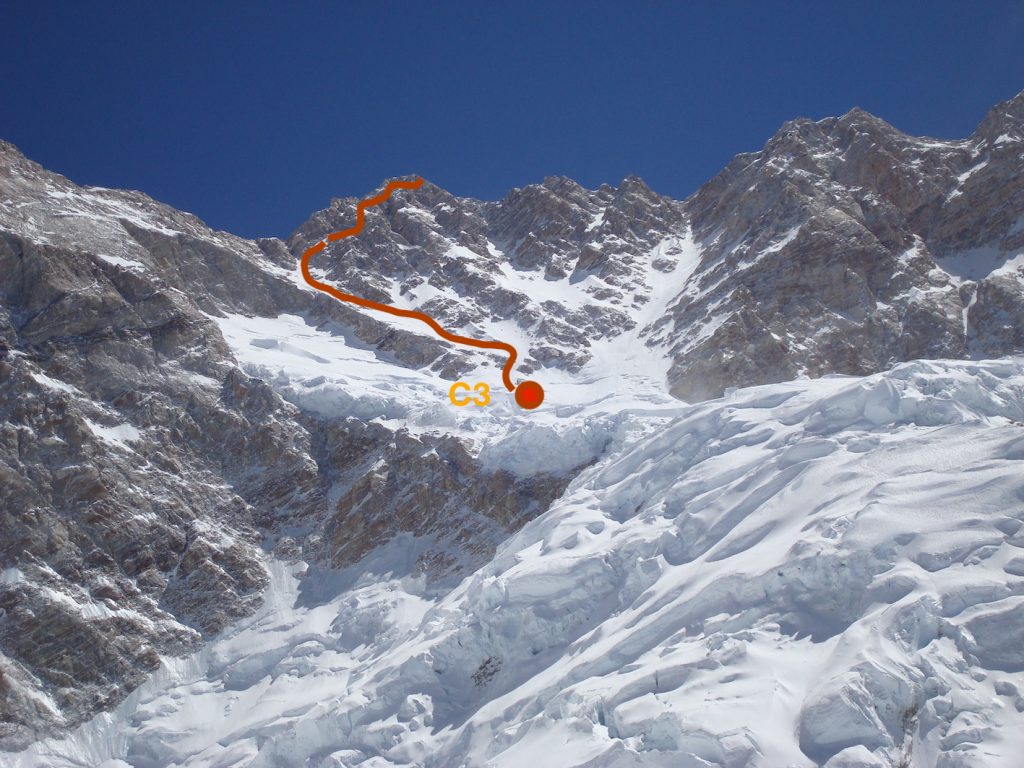 The imposing last section of Kangchenjunga is mainly on rock, with some sections of ice and mixed. If there are no ropes, it is essential to memorize the most reasonable path to go up the face to the top.

“Remember you will be leaving at night,” Benet said. “There are so many lanes that mistakes are easy to make.

You start a 700m long couloir of 45-50º hard snow leading to the rock face. The face, they explain, is mostly vertical, technical rocky with a few mixed sections. There are several grade III crossings – not so easy at 8,000m with mittens and expedition boots.

Again, the face is so large that it allows for a lot of variation, but the difficulty is pretty much the same everywhere. There is no chance to relax all the way to the top.

“Jorge Egocheaga told us that there was a little encore somewhere near the top, and I was afraid of this moment,” recalls Nives Meroi. “But we never got to a point of recall. Instead, we finally made it to the top. Obviously, the Spaniards had taken a slightly different path. This is why it is so important to study and choose the most logical line.

Benet pointed out that sales teams take a longer path where they can better mend ropes. “We are more used to mountaineering and looked for the most direct line to the top,” he said. 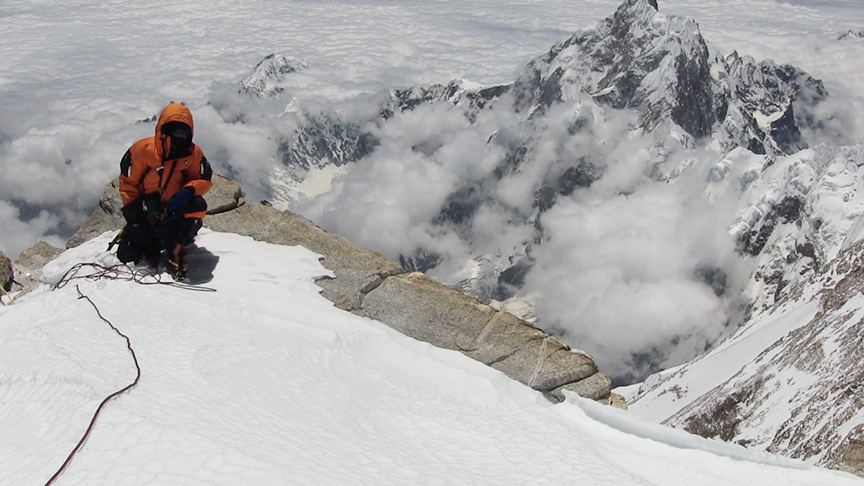 Both climbers agree that the summit itself is unmistakable. “It is a 10m high tower ending in a flat granite platform, comfortable enough to take pictures.”

Some climbers diplomatically stay away from this high point, out of respect for the people of Sikkim, for whom the mountain is sacred. “I stopped just a few steps before the highest point,” Meroi said.

Meroi emphasizes how important it is to keep some strength in reserve for the descent. “It’s demanding, technical and exposed, especially if there are no fixed ropes,” she said.

On their ascent, the couple only had a 20m rope which they used to abseil down the vertical sections. Some just got off. But there is almost 1,000 vertical meters between the summit and Camp 4, and that requires all the attention and skill of a climber. In poor visibility, the risk of getting lost increases considerably.

Without oxygen or ropes, the C4 was pretty much the limit for Meroi and Benet. “We left at 10 pm and returned from the summit to our C4 tent at 6 pm,” Meroi said. “It is not uncommon for climbers to reach Camp 4 at night,” Benet added. 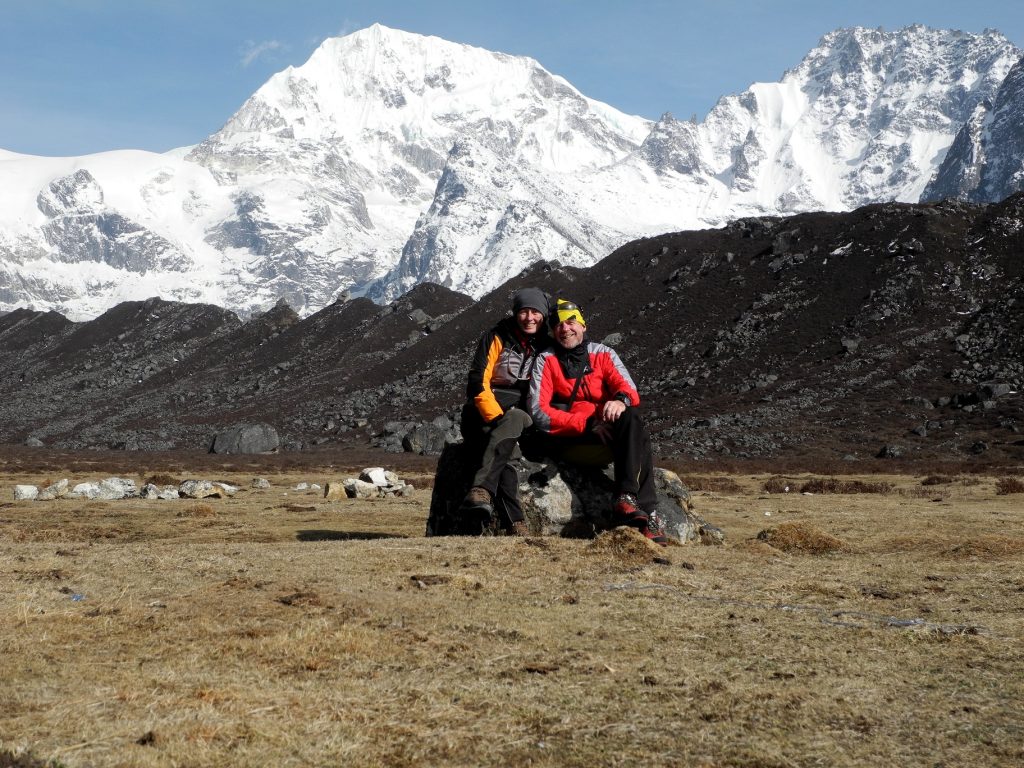 Go back down the valley. Photo: N. Meroi / R.Benet

Despite its difficult 1000m between Camp 4 and the summit, Kangchenjunga is an unforgettable experience. “It’s so huge and so beautiful,” said Romano. “I also like its technical difficulty. It’s a mountaineer’s summit, where you really have to climb, not just climb.