We had a perfect breakfast that Nine Beers sister and her husband cooked for us. Then we went to refuel in Acton with their car. It was Halloween and we were wearing cat ears on a hike. It made digging a cat hole more special.

I weighed myself and lost weight again, about 15% of my weight. It wasn’t strange that I constantly felt tired.

We got to the KOA campground and saw you could order pizza delivery there so that’s what I did. Saltlick was there again and he sat down to dinner with us and gave us nachos. We walked together for a few hours. It was so hot that we could wear t-shirts at night. I was even cowboy camping. 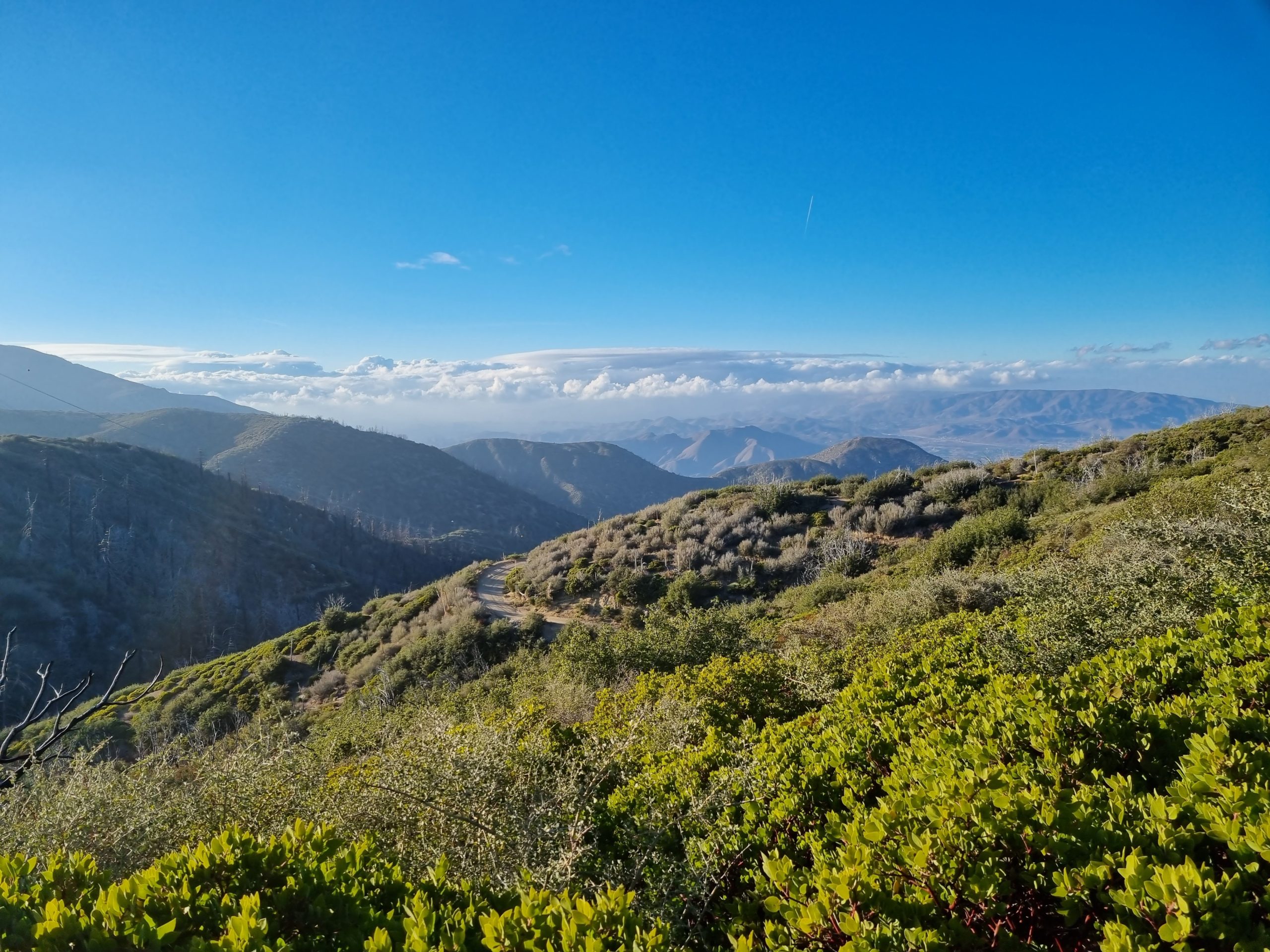 I was kept awake by a fly biting my face. The alarm went off at 05:30 and I was tired when we started walking. It was a crazy day of climbing, 5500 feet of elevation gain. I was so exhausted that I told Nine Beers I needed to take a nap. So we took a 20 minute nap on a steep hill with our feet on our backpacks.

There was again a lot of wind. The noisy wind is very exhausting for the brain.

It was colder during the day and the weather report said there might be snow overnight. We decided to go on a highway that had a pit toilet for potential emergency camping.

We ate breakfast, lunch and dinner sitting in the middle of the trail. On the way down to the toilets we saw that there were too many spiders there and had to set up our tents with at least the ability to get to the spider toilets if our tents got soaked. 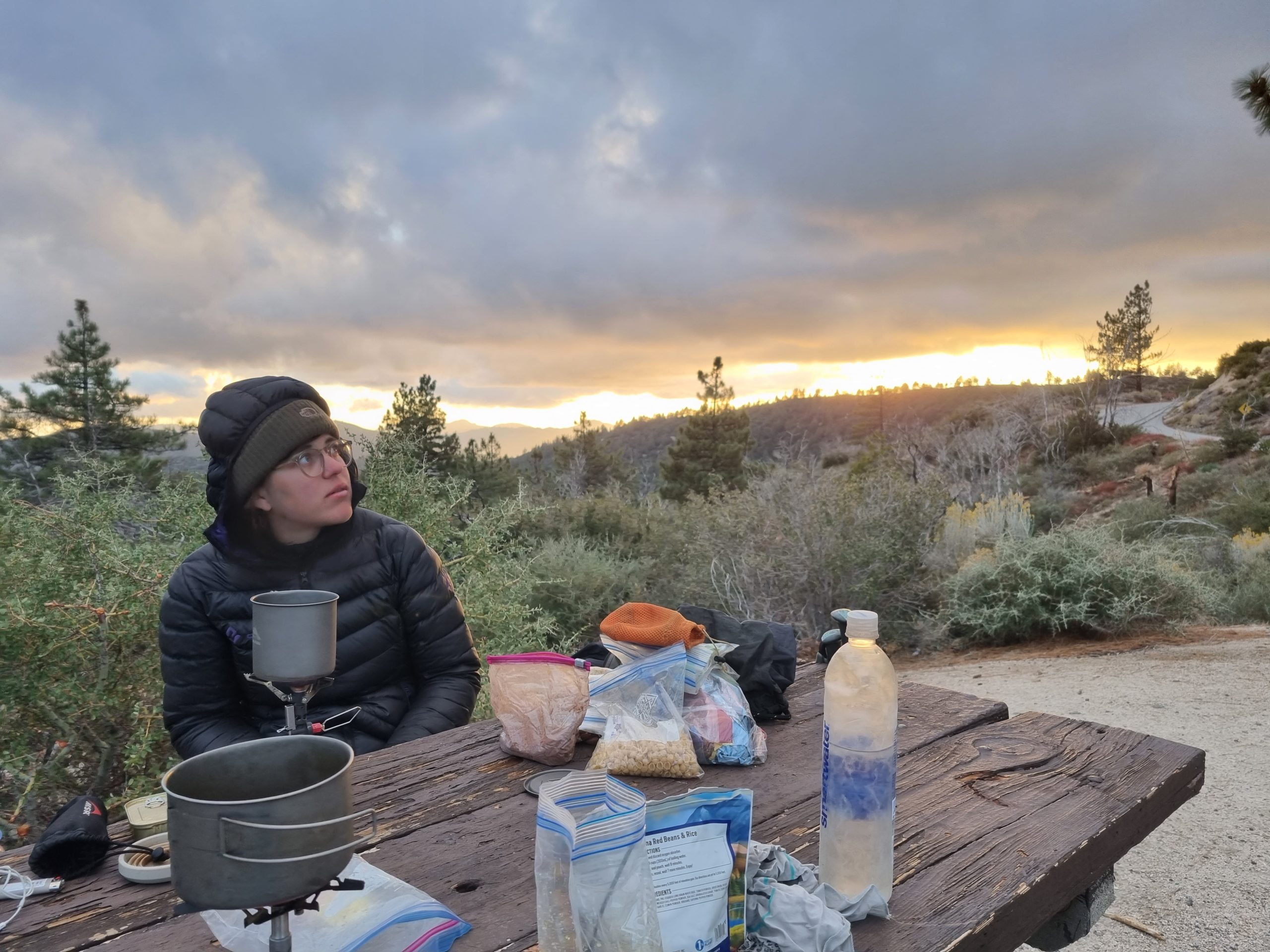 It was raining overnight as the weather forecast predicted and as it was still raining when our alarms went off at 5:30am we decided to continue sleeping until 7am. It was still foggy when we got up and it was raining occasionally. We went to a fire station to fetch water and had our breakfast gloriously in front of an outhouse. Nine Beers food had been unintentionally soaked overnight and I burned a hole in my rain skirt with the gas stove.

We were climbing the hills with no energy even though when the sun came out it was beautiful. It was pretty cold most of the day and I mostly hiked in my stocking cap.

We didn’t make rapid progress so decided to shorten the walking days than usual. It was also going to be record cold the next two nights, so we wanted to plan our camps so we could be at lower elevations – and near emergency toilets as our tents aren’t really designed for all four seasons.

We had lunch near a picnic table where a few hunters were ending their day. It was already very cold when the sun went down. Unfortunately the campsite we arrived at had the smallest toilets so it was not an option for emergency camping. We set up our tents on the private cabin porches, which was a little difficult for me since I don’t have a freestanding tent. It was even safer to have some sort of roof over your head as it looked like it would snow overnight. 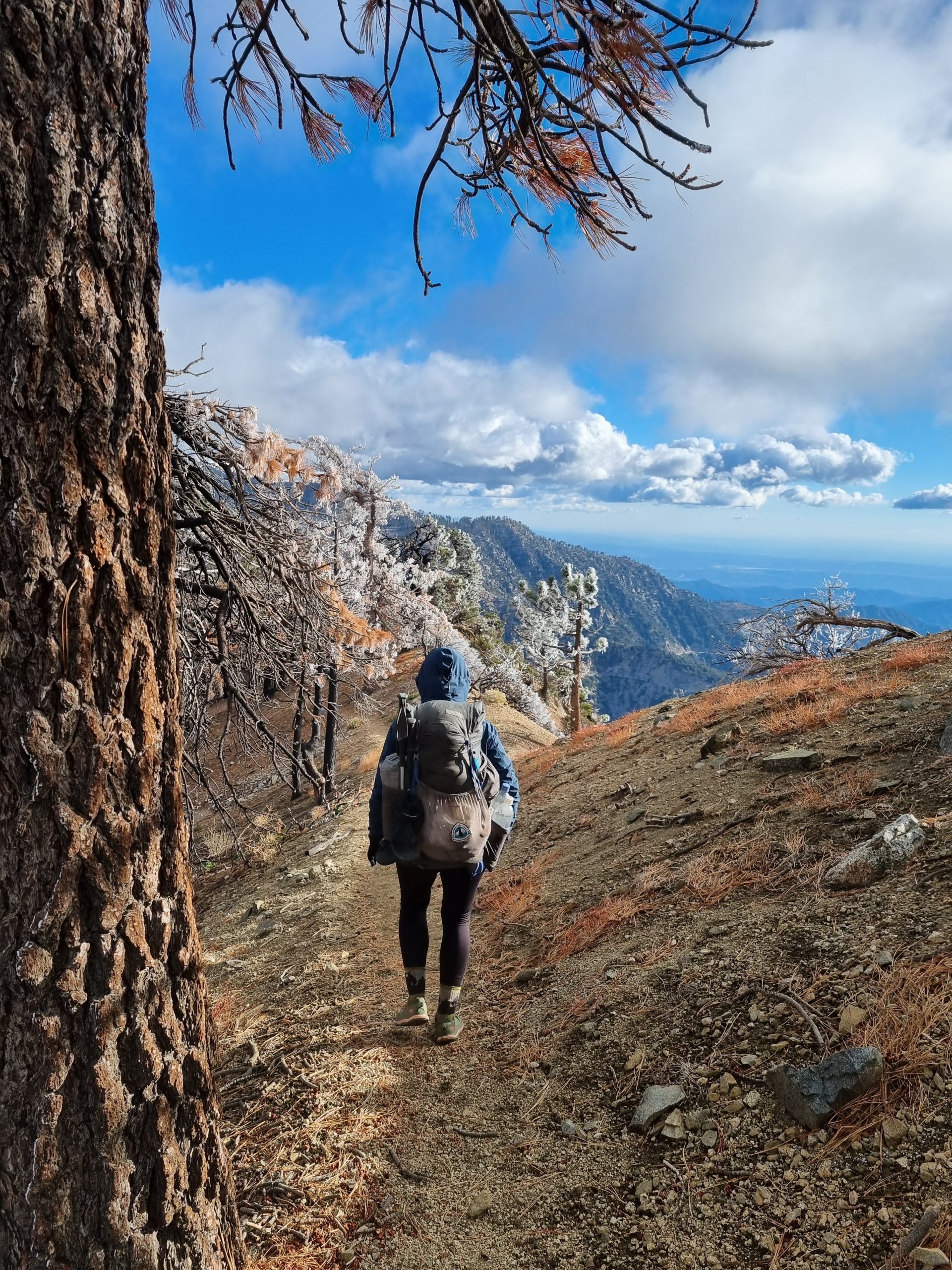 We set the alarms at 06:30 as the morning would be cold. Indeed, it was 26F at 7am and God knows what it was doing all night. A few snowflakes floated from the sky and the landscape was hazy. The trees were white with frost and the poor poodle bushes seemed to shiver in the cold.

We wore almost all the clothes we had and never took longjohns during the day. We managed to have lunch in the sun at a campsite and dry off our wet things. Sky and Big Bird who I had met at Kennedy Meadows North passed by and they were also complaining about the incredibly cold weather and how easy Southern California was as they say.

The landscape was magnificent but we were especially too cold to enjoy it. The panties I had rinsed out on lunch break froze in two hours and the water bottles started to freeze. It was also a lot of very steep climbing that made our legs sing hallelujah.

When we reached the beautiful junction with Mount Williamson, it started snowing huge flakes. It was cold even though the sun was shining. We descended and then did the last crazy climb up to the campsite. We tried to make a fire but all the wood was too wet to light. We had our miserable dinner in the cold evening and drank our emergency whiskeys with hot chocolate. The temperature had dropped to 20 degrees Fahrenheit and we escaped to our tents already after 7 p.m.

The following week’s weather report did not promise much improvement in the weather: snow and very cold temperatures. 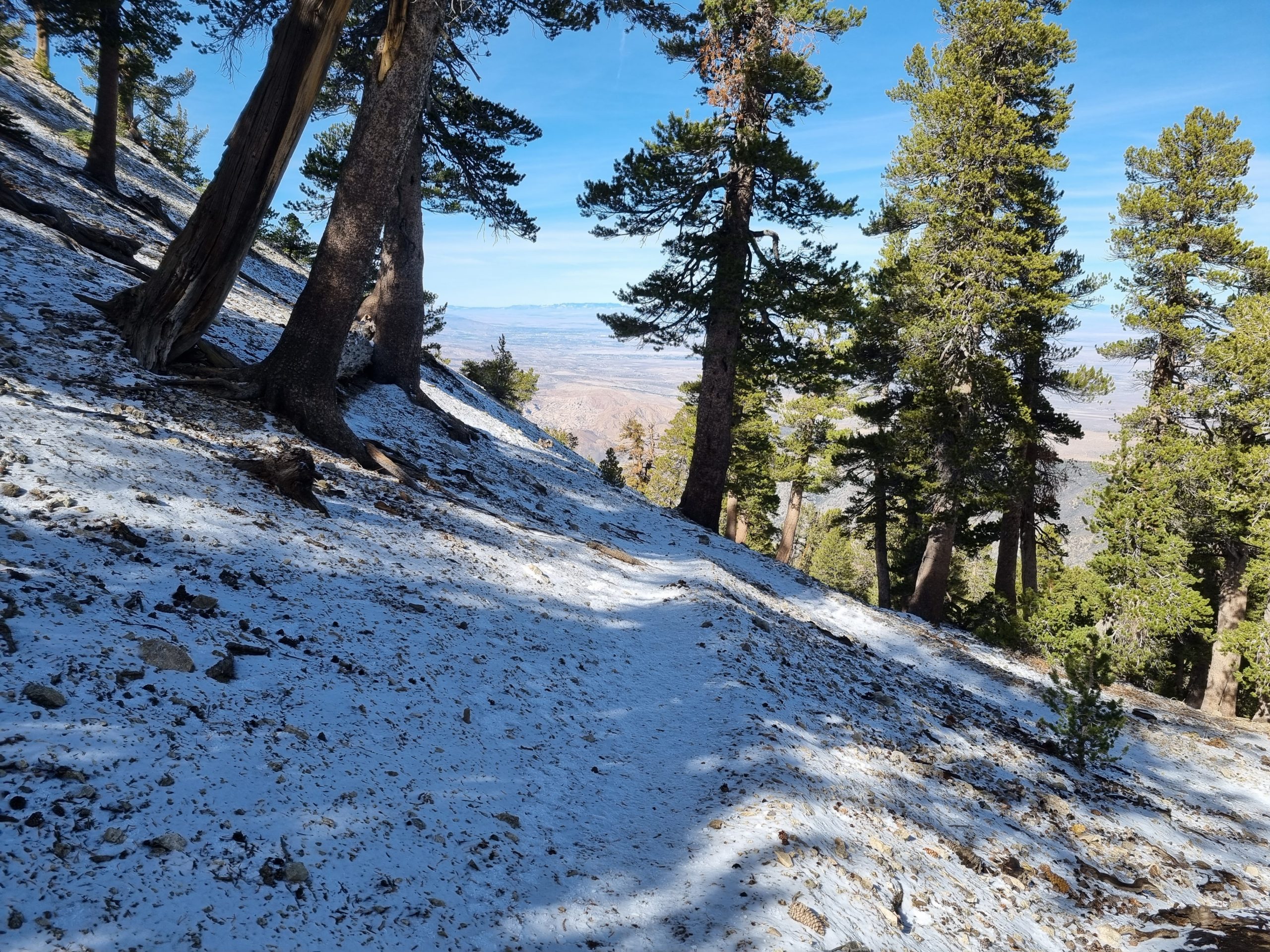 It was the coldest night on the trail. We slept with all our clothes on and were still freezing like crazy. I had to blow my mattress twice and it was still empty when I woke up again. I also heard noise and thought it was a bear but it was just Sky and Blue Bird coming up. When I woke up again, all the water bottles and the inside of the tent were frozen.

We started the hike at 7am with all our clothes on and had to strain some water. We were again very tired but had to climb the mountain leading to the summit of Baden-Powell. We were going to the top but the trail up to it was snowy and sometimes there were crazy icicles falling from the trees on us. We were so tired we decided to skip the peak.

I had cell service and learned that my sister had to put down the dog she had had for almost 16 years. It was very sad as she was a family member and this news made the day even more miserable.

The plan was to sleep on the trail and drive to Wrightwood the next morning, but after studying the map I realized we could walk into town from an earlier trailhead. I said to Nine Beers, “We could have some beers tonight” and she replied, “I’m sold!”

We met a guy who thought we were German and we walked with him. He offered to drive us to Wrightwood and even gave me his sitpad because I told him I had lost mine.

In Wrightwood we met Rock Solid at the hardware store and there we got a number for a trail angel who could put us up. We had coffee and pie at a cafe and free hot dogs at a gas station. A lot of people were asking, “Southbounders? when they saw us.

There was a market on Friday and we met our host with a husky. He took us to his huge house that he had built himself and we had dinner and drank beer with him. It even had a hot tub but unfortunately it was too late for us to use it after dinner.