A mountaineer injured after falling on El Diente Peak was carried off the mountain using a short distance technique by Mesa Verde Helitack. (Courtesy of Dolores County Search and Rescue) 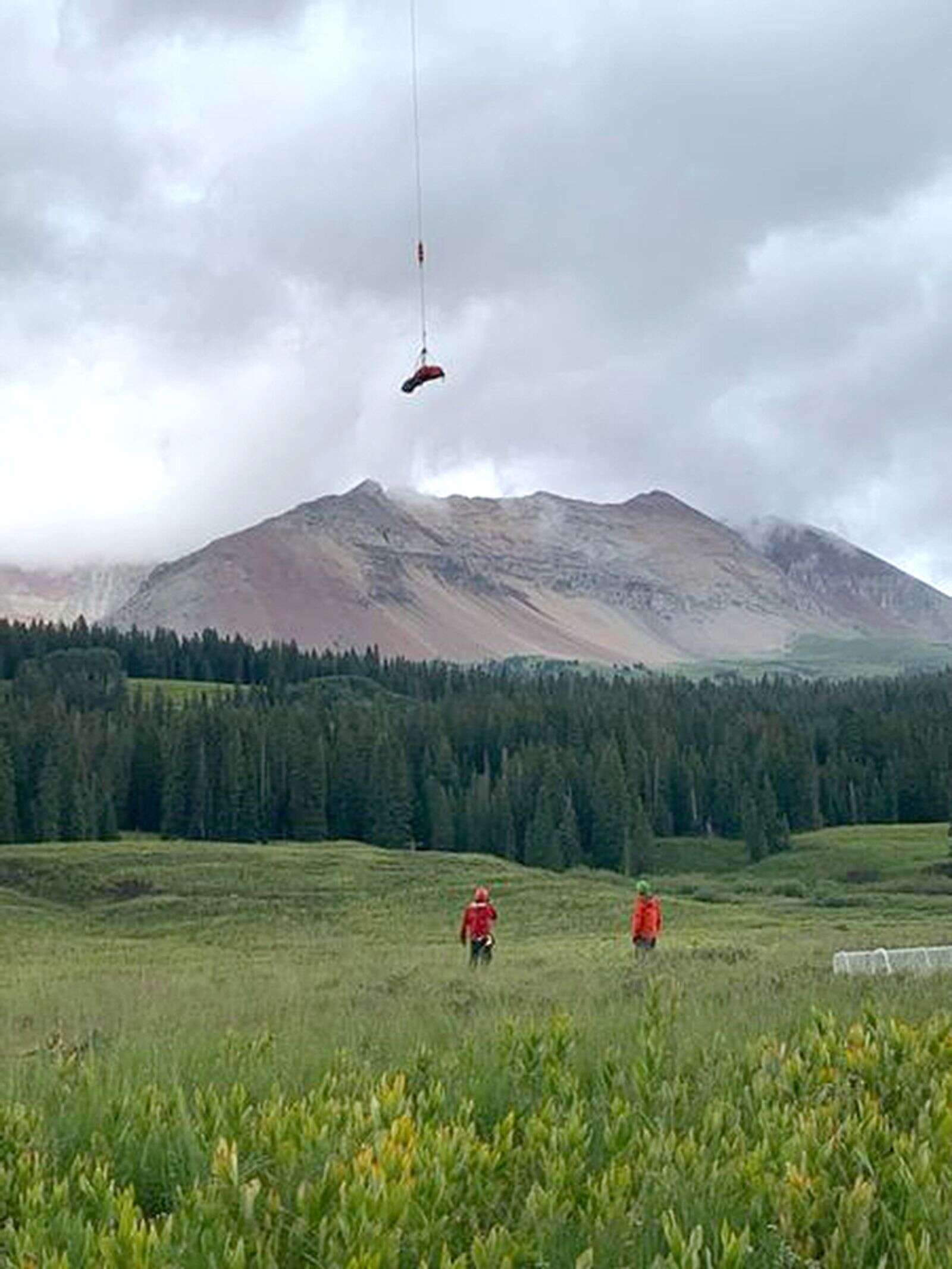 An injured climber was rescued from the peak of El Diente on Sunday in a complex operation involving multiple agencies, two helicopters, torrential rain, a mudslide and a few doses of luck.

The technical rescue plan was executed flawlessly, but within a narrow window of opportunity, said Dolores Search and Rescue Captain Keith Keesling.

“The timing was tight on many fronts. Skill was paramount, but luck was also on our side,” he said.

An experienced climber in his 30s was descending from the 14,020ft summit around 10am when a rock he was standing on broke loose and he fell 20ft down the northwest face.

He landed on a small ledge and fractured his lower leg.

“A few feet either way, and it would have been a recovery,” Keesling said.

The identity of the climber has not been revealed.

Her bag containing extra clothes, water, food and gear flew away during the fall and was lost on the mountainside.

Keesling said the man called his wife at the top and pocketed his cell phone and Garmin satellite communication device rather than putting them in the bag. He was able to call for help.

Several rescue teams organized at the Kilpacker Trailhead, and the Mesa Verde Helitack was called in for a short-range rescue operation.

First, a federal rescue technician was hoisted by a landline and dropped to the victim on the mountain. 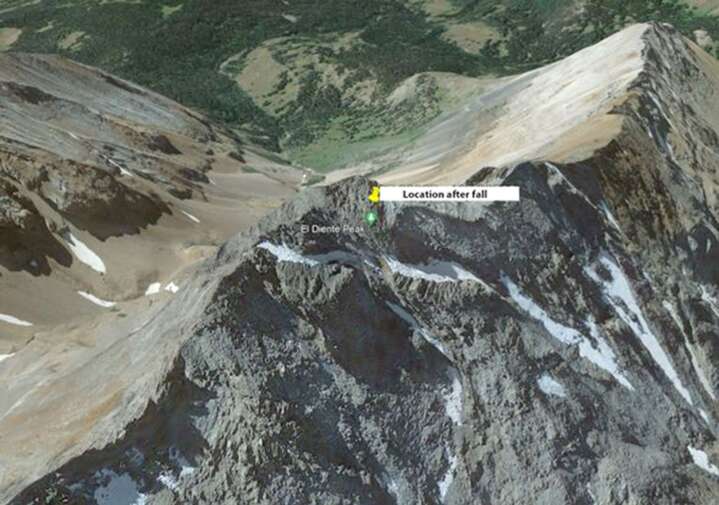 A mountaineer injured at the top of El Diente had to be rescued by helicopter on Sunday. (Courtesy of Dolores County Search and Rescue) 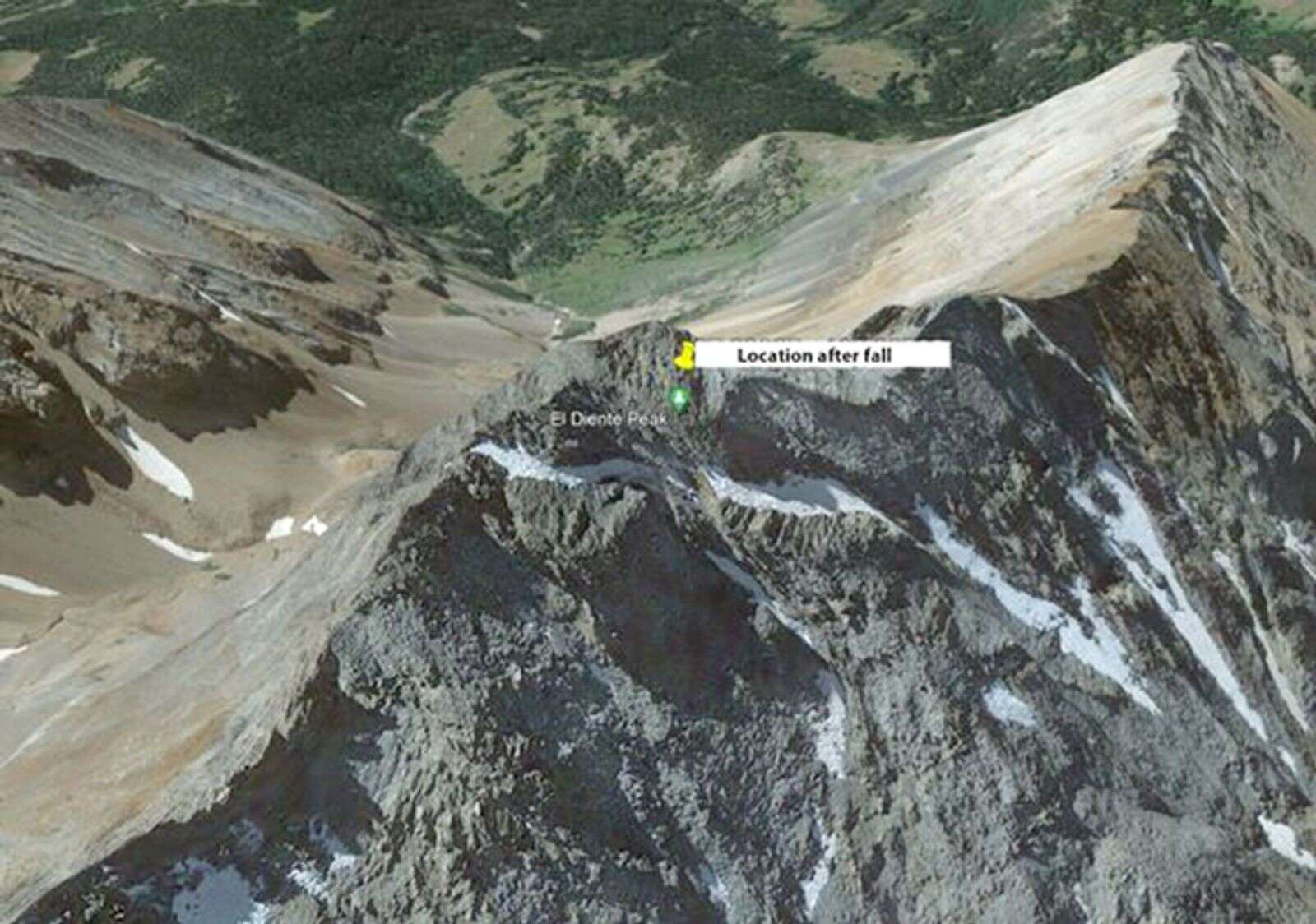 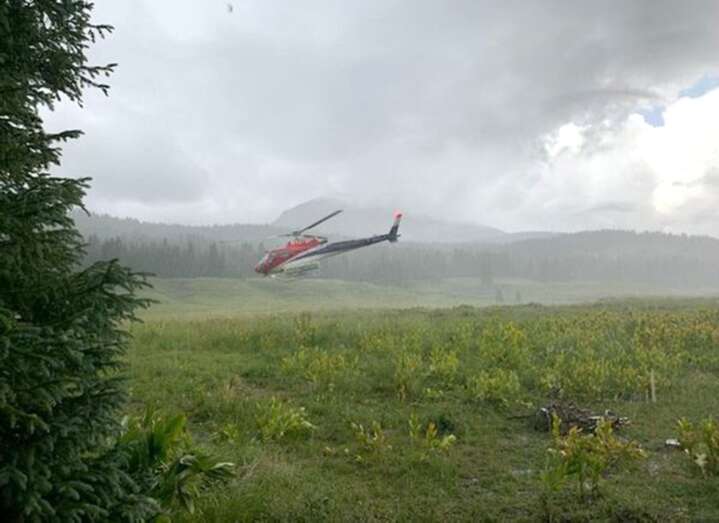 Mesa Verde Helitack flew out in the rain to rescue an injured man on Sunday at El Diente Peak. (Courtesy of Dolores County Search and Rescue) 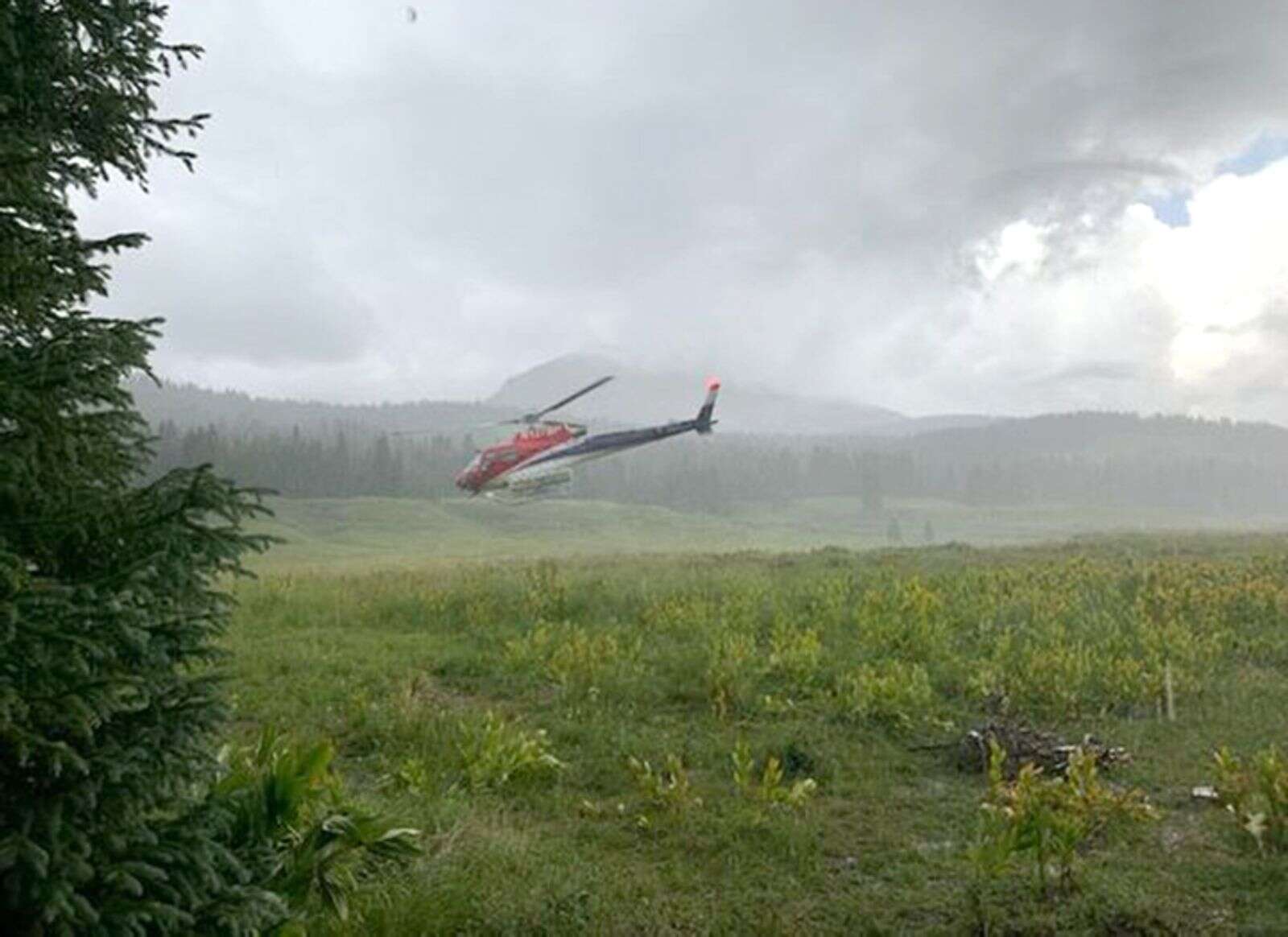 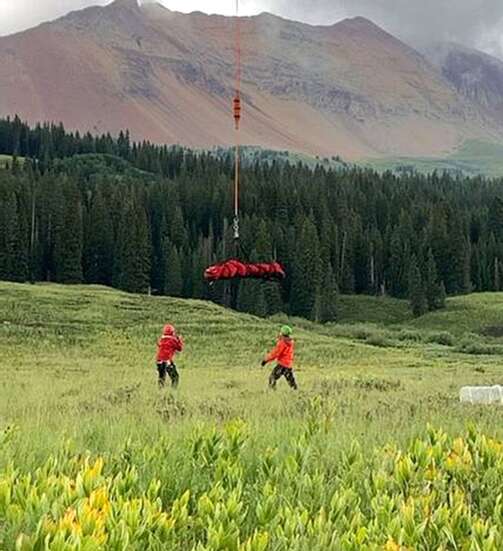 A fall victim was lowered by Mesa Verde Helitack to lifeguards on Sunday near the Kilpacker Trail. (Courtesy of Dolores County Search and Rescue) 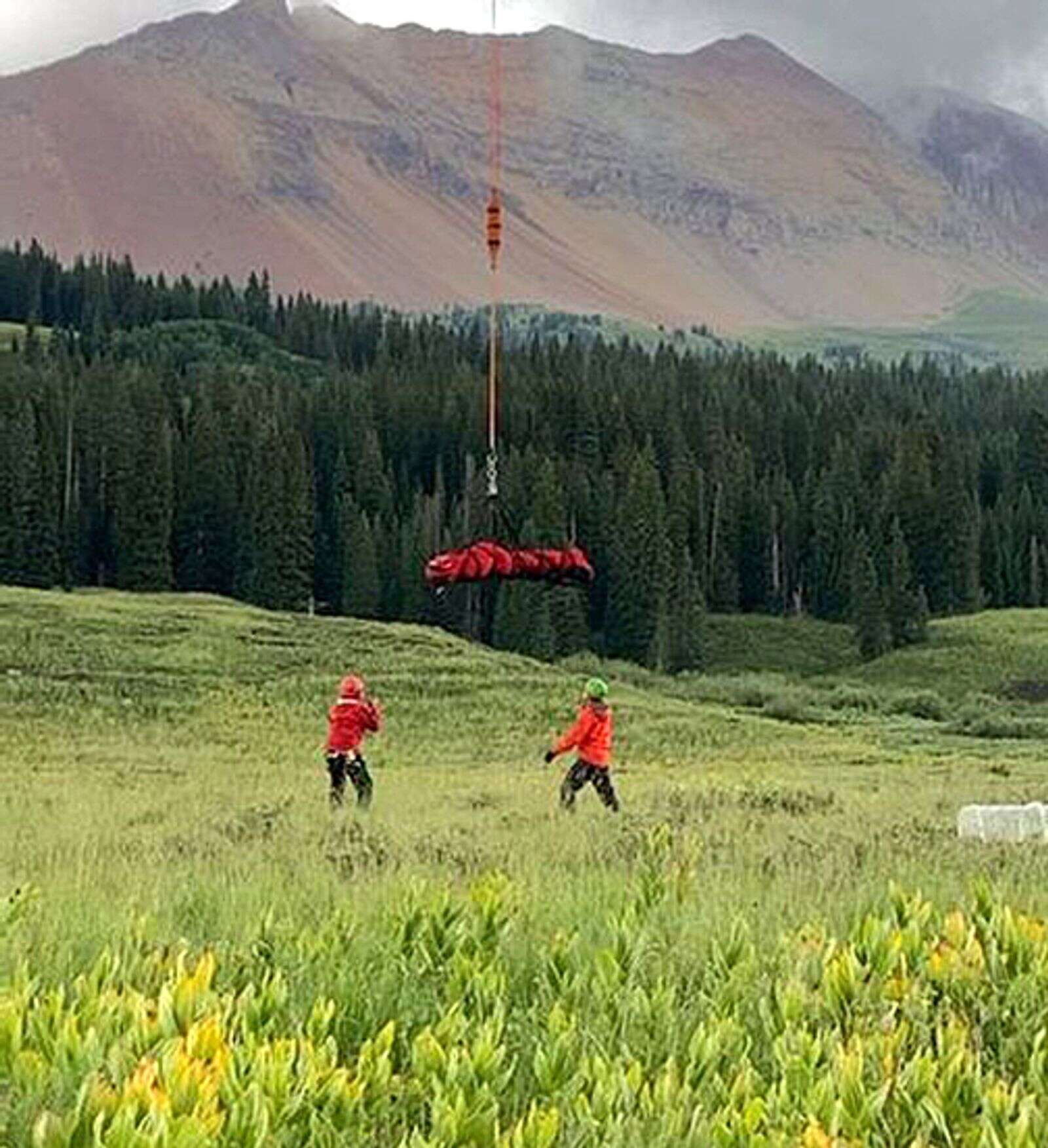 The climber was packed onto a stretcher attached to the line under the helicopter and transported 5.5 miles to a South West Health System ambulance waiting at the Kilpacker Trailhead. He was taken to Southwest Memorial Hospital.

Using the landline, the helicopter returns to pick up the rescuer still on the mountainside. He flew off the mountain in a torrential downpour as he hung on the line.

“He said it was a wet race,” Keesling said.

A team effort led to the successful rescue, and the stars also aligned.

For example, Keesling said the Mesa Verde Helitack was due to depart the next day. Without the certified short-haul helicopter, the climbers would have had to spend time climbing to the victim, who was in a vulnerable medical condition.

Just 15 minutes late for the short haul would have meant it was canceled due to bad weather. Fortunately, during the helicopter rescue next to the mountain, there was no wind or lightning.

Then, just minutes after the SHS ambulance left, the road down the mountain was washed away by heavy flooding, but the ambulance had already passed that point.

The patient is recovering and very grateful, Keesling said. He was in direct communication with the man during the rescue and said he was in shock but in good spirits.

“I kept talking to him, making him laugh, when he saw the helicopter flying in it was a big relief,” Keesling said.

Satellite rescue devices should be essential equipment for any backcountry traveler, Keesling said.

“We spend as much on our jackets and our boots. It’s standard equipment that will save your life and the lives of others,” he said.

Without it, the climber would have been stranded at the summit with minimal clothing in heavy torrential rain and no way to contact anyone.

The San Miguel Sheriff’s Office’s new helicopter was also on hand to scout the mountaineer’s location and report weather updates.

Keesling said Dolores County Search and Rescue responded to seven calls in July. The calls were aimed at hikers and climbers who were late or unprepared for mountain weather conditions such as rain, hail and cold. They all came out safe and sound.

More education is needed on how to safely prepare for backcountry travel. Pack as if you survived an unexpected night, with extra clothes, water, purification tablets, food, flashlight, first aid kit, rain gear, lighter and a satellite communication device.