Again restless to leave the civilized restraints of Julian and eager to pass my Southern California backyard, I continued hiking the Pacific Crest Trail. Leaving Julian, little did I know that I was going to cover the next 110 kilometers on my own, without the company of my hiking partner.

Track town Julian was still shrouded in stormy skies as I woke up groggy at 7:30 am after my Nero day. My hiking partner, Gina, was worried about the fever symptoms she had experienced the day before and made the decision to return home to recover rather than risk worsening the infection. It was hard to leave Gina. There’s something incredibly special about having a familiar face, a piece of home, with you on the trail. And there’s something incredibly intimidating about my hiking becoming a solo venture, even temporarily. As I stood at mile 58.5 with fellow hikers Justin, Kylie, and Rens, we received a notification that Gina had tested positive for COVID-19.

Justin and I pushed through the Anza-Borrego Desert, circling Granite Mountain together. For a while during the day, I walked completely alone. Although it was only 30 minutes of solitude, I missed the constant companionship Gina provided me. It wasn’t the loneliness I felt, but rather an eye-opener that I yearned for the community that the Pacific Crest Trail provides.

I joined a group of hikers at mile 68.4 where another hiker was amazing by the tiny size of my backpack. He wanted to see everything I was wearing, so I unboxed it. To everyone’s surprise except mine, 75% of my backpack was food. A girl must eat!

After eight days on the track, I finally had a good night’s rest. The release of the valve on my Therm-a-rest was no longer a relief, but rather a momentary misfortune. Earlier on the trail, Gina and I had placed bets on when we would see our first rattlesnake. I placed mine at 76.3, while she bet the first hazard noodle wouldn’t appear until mile 103. Turns out my guess of 76.3 couldn’t have been more perfect. After several days of stormy weather, the desert floor was finally baking under clear blue skies, and the open terrain helped in my search for snakes.

Although it was only 67 degrees, the trip past Scissors Crossing (Hwy 79, mile 77.1) felt brutally hot. Justin and I slowly climbed the cactus-covered hills, eventually finding a shady spot to eat our lunch. The arid climate wasn’t strong enough to curb my appetite, but at this point I’m not sure anything was. As we left our lunch lair, I picked up my hiking poles to find dozens of cactus needles stuck to the foam handles, now stuck to my fingertips. I stayed up for 30 minutes trying to tweeze every last needle out of my hands, but the stupid little assholes stayed with me for days. So many stupid things I’ve done that could lead to a trail name and somehow I’m still Rachel!

At mile 86.6, Justin and I set up camp for the night in a dry riverbed, next to what I convinced Justin was a capybara den. We walked around like idiots holding our phones trying to figure out which campsite would have the best phone coverage. We could pitch our tent on the windiest, steepest terrain, but you bet our campsites will have five bars of 5G LTE. 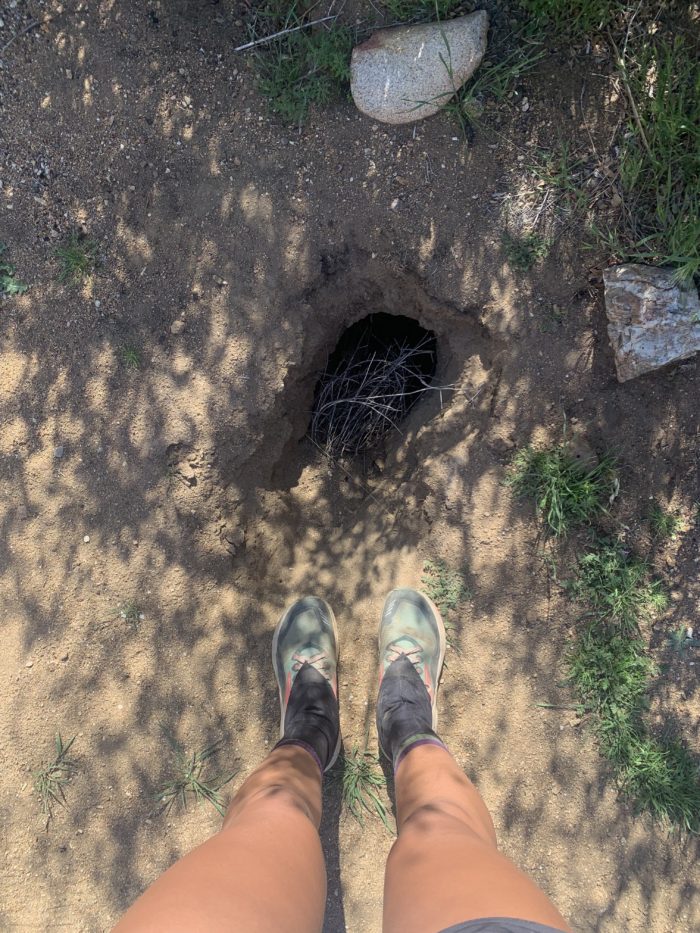 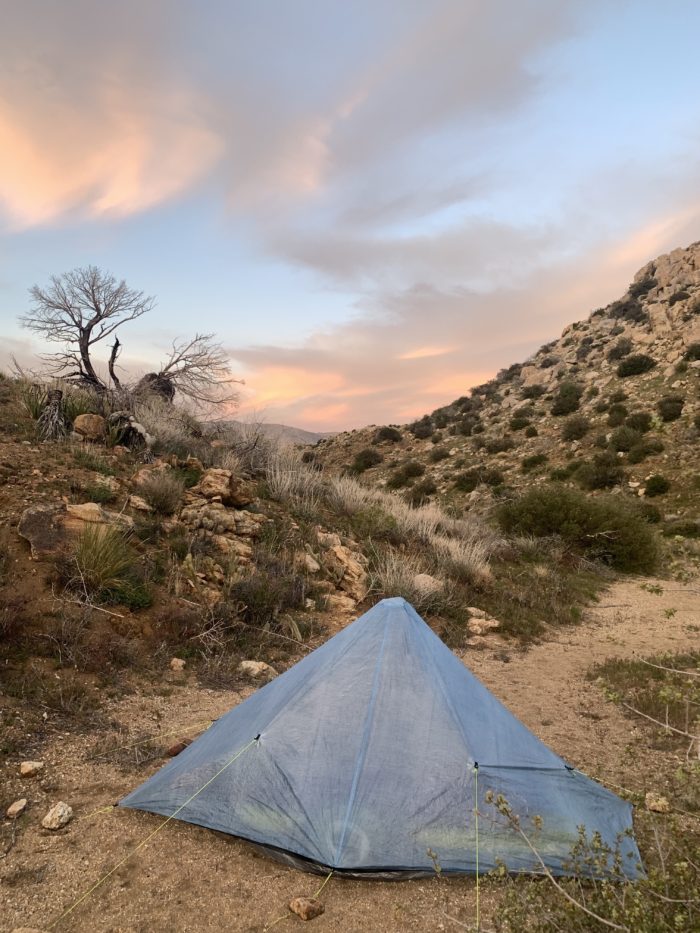 Camping compatible with the My T-Mobile service

Nothing beats waking up from a deep sleep with your bag of food delivered right to your door. The night before, Justin and I had hung up our food fearing the huge rat on steroids that had dug the capybara hole in our campsite. It was either Justin or the rat that returned my food, but I took a guess and thanked Justin for breakfast in bed.

The last 27 miles felt like a time warp; Justin and I unwittingly made our way into the hiking group that started a day before us, and we hadn’t seen a familiar face in days. However, as we were hoisting our packs on our backs at 8:30 a.m., our missing tramily members, Aaron from Australia and Greg from Seattle, came for a walk around our camp. We continued on as a pack once more, Justin sputtering about the beauty of the valley below – the man is Bob Ross when he’s drinking caffeine.

Together our tramily walked to mile 100. We were so engrossed in the conversation that we didn’t stop once all day except to commemorate hitting triple digits. At mile 101 my feet felt a strain with every step, but that’s what happens when you run 14 miles without even thinking about stopping. The tramilys went to the market in the Montezuma Valley and devoured all the carbonated, sugary or starchy products they had on their shelves. During the drive, Justin insisted he was going to have a hearty salad, but I watched him instead inhale an ice cream sandwich, a bag of chips, and two diet Dr. Peppers. 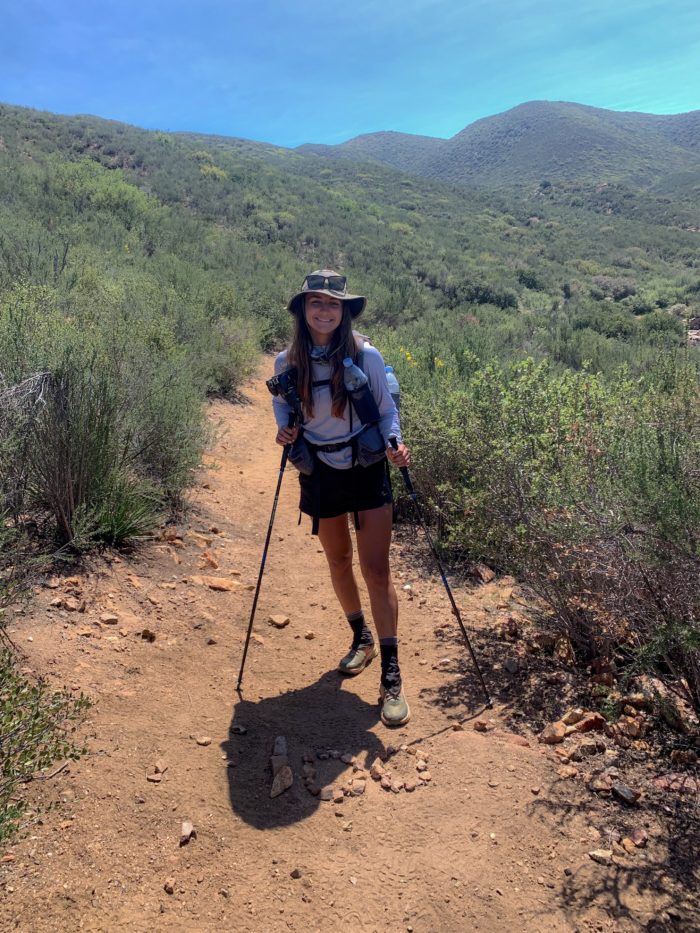 100 miles on the Pacific Crest Trail

Waking up in our roadside valley at mile 101, we now had six: Aaron, Greg, Justin, Adam (9 Lives; the only one with a trail name), Ben and myself. The six of us happily scampered off to Warner Springs. Being in a group with five other guys, my stride just didn’t compare to theirs – I felt like a little corgi dog on my back trying to keep up with the big dogs. When we reached the Warner Springs meadows, we were surrounded by wild cows stomping around in their own little tramily. At one point a huge herd of cows rushed towards our tramily, blocking the path in front of us. It was a tramily dead end in its own right; the cows finally surrendered.

I was hosted by my parents at Warner Springs, with a buffet breakfast for my tramily. We stuffed ourselves as much as possible, restocked and chatted before continuing to Agua Caliente Creek. Climbing the banks of Agua Caliente Creek was a daunting task at 3 p.m. and eventually part of the established camp, but the youngsters kept going. Trying to tackle a 1500ft climb at 4pm wasn’t the smartest move on my part, and was by far the hardest PCT endeavor to date. Two miles from our future camp, I was ready to curl up in a fetal position and call it a day, but instead Adam managed to drag me up the hill deflecting my misery with a chatter of entry level. After a long 18 mile day, another summit hiker serenaded the whole camp with her banjo and masseuse dexterity. 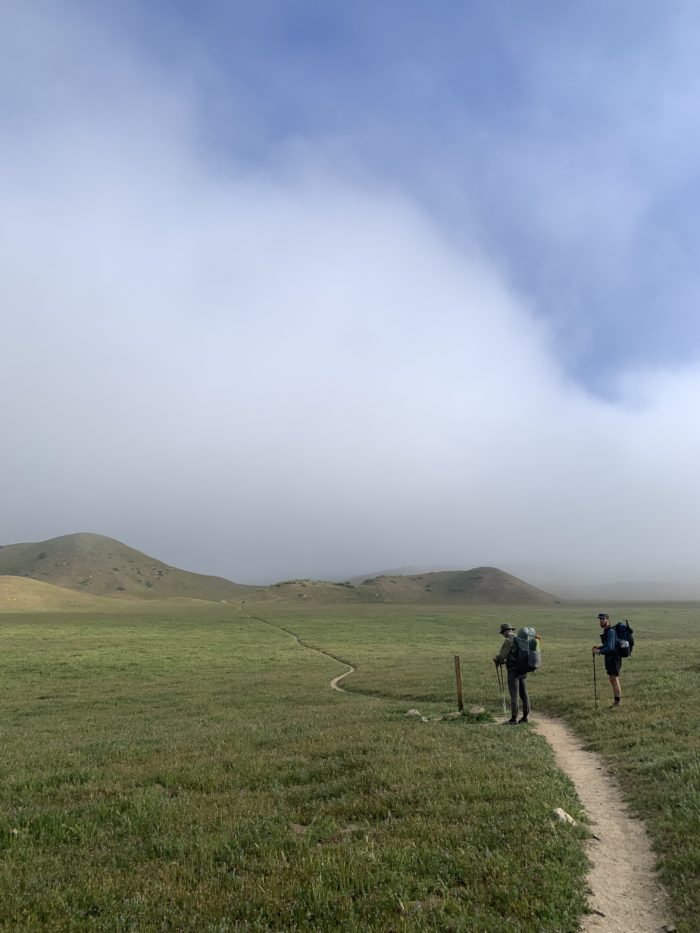 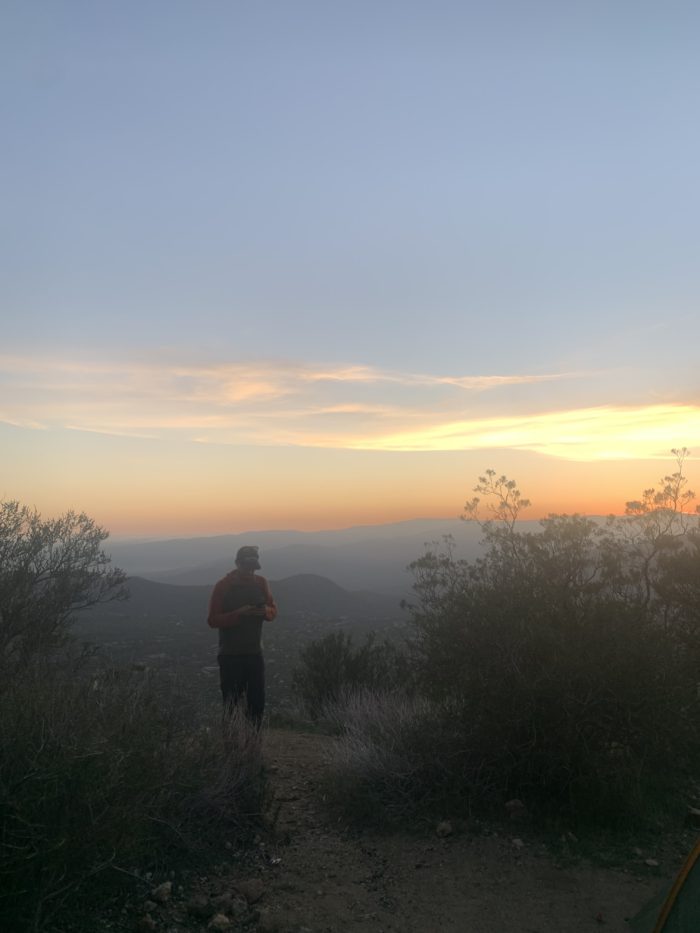 Our magnificent reward for pushing that fucking hill