The sun burns mercilessly from the sky, even early in the morning, as the sandy soil becomes as hot as hot coals. A horse and cart pass, then a cowboy approaches from afar on his horse and the living room doors creak in the dry desert wind.

No, this is not the Wild West. It’s not even the United States. We are actually in the south of Spain, more precisely in Andalusia.

The Tabernas Desert begins about 30 kilometers north of Almeria. The area, which is strictly speaking a semi-desert, covers 280 square kilometers (28,000 hectares =. The sun shines more than 3,000 hours a year in this region. In summer, temperatures can easily rise. at 35 – 40 degrees Celsius (95 – 104 Fahrenheit), and it’s rare for more than 250 millimeters of rain to fall here – all year round.

A piece of Hollywood in Europe

As a result, there aren’t many animals or plants to find. But this is precisely the great potential of the region. With its arid landscape, it has already served as the setting for many directors for various adventure films. About 500 films were shot in Tabernas. 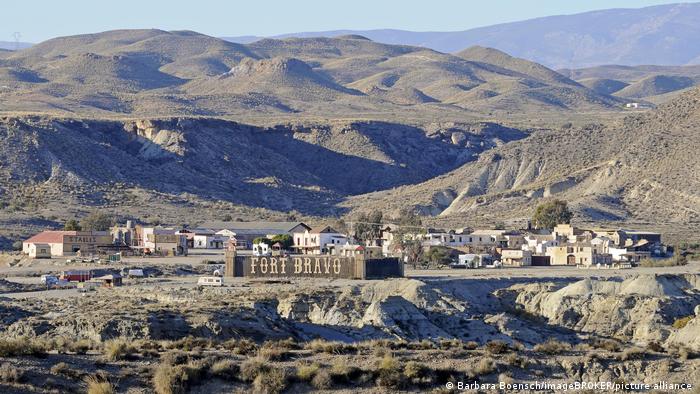 Texas or Spain? The Tabernas Desert has been transformed into many different regions on the screen.

Indeed, Arnold Schwarzenegger turned into Conan the Barbarian here, while Harrison Ford became Indiana Jones. Even part of the classic desert movie Laurence of Arabia was filmed in this Spanish province.

But generally speaking, when the cameras are rolling, the Tabernas Desert most often turns into the Wild West. Charles Bronson and Henry Fonda dueled here for Sergio Leone’s cult western Once upon a Time in the West. Clint Eastwood has been involved in several shootouts with villains for a handful of dollars, and Pierre Brice stood in front of the camera in the Tabernas Desert for the German TV production, Winnetous Rückkehr (The Return of Winnetou).

Elaborate sets were built for many of these productions, and at one point there were 14 such western towns scattered throughout the region. Three of these structures are still standing today, and if there is no film production, they are open to visitors. In this way, tourists then have the opportunity to also feel in the Old West, albeit in the middle of Europe.

And that’s exactly what attracted DW reporter Hendrik Welling when he visited the Tabernas Desert for the series “Europe to the Maxx” for DW’s lifestyle and culture magazine “Euromaxx” .

In the western town of “Fort Bravo”, he slipped into the role of a real cowboy and even fought a duel with a villain – played by one of the local showmen. Discover his cinematic performance and much more in our video.

Getting There : From Almería you can reach Tabernas by car in half an hour.

Our special tip:Visit the movie set town of Fort Bravo (every day from 9 a.m. to 7:30 p.m.), which still serves today as a filming location. Visitors can experience stuntmen performing daily western shows.

Europe to the extreme: the series “Europe to the Maxx” on the DW lifestyle and culture magazine Euromaxx brings to life the exceptional experiences of Europe – from extraordinary architecture and spectacular landscapes to unique cultural phenomena. Accompanying the series, the book 111 extreme places in Europe not to be missed was published in cooperation with Emons Verlag. It’s an informative and entertaining alternative travel guide for avid travelers, fans of Europe, and anyone who likes to show off with unusual pub quizzes. Full of guaranteed records!